Earlier today, Netflix officially released Guillermo Del Toro’s Pinocchio Movie trailer. In the film, David Bradley plays the kind father, Geppetto, who creates a wooden boy after losing his real son. The trailer shows Geppetto’s fatherly love and desire to be a father again. Eventually, this dream comes true after Pinocchio, the puppet, comes to life. Gregory Mann voices the title character of the film, which is an adaptation of the much-loved fairy tale. Unlike other adaptations, this film is a musical and stop-motion animation.

During the trailer, we heard Geppetto say to his son, “People are sometimes afraid of things they don’t know.” Naturally, this scene probably occurs after the citizens of the town reacted negatively upon seeing Pinocchio for the first time. Also, it is good to show how much Geppetto loves his wooden son. He wants him to succeed and not be afraid of the outside world.

Plus, Guillermo’s trailer Del Toro’s Pinocchio Movie gives us an idea of ​​some of Pinocchio’s adventures in the film. He is seen struggling in a boat, begging his father for help. We also see many talking animals and other characters undergoing wonderful transformations.

This film is one of the few Pinocchio adaptations, since Disney released a live-action version a few months ago. However, even though the style may be different, each adaptation contains the same message about the power of love.

Cast and crew of the film Pinocchio by Guillermo Del Toro

As you might have already guessed, Guillermo Del Toro directed and produced the film. He also worked on the screenplay with Patrick McHale. It adapts the 1883 story by Carlo Collodi. Other Guillermo Stars Del Toro’s Pinocchio Movie include Ewan McGregor, Ron Perlman, Cate Blanchett, Finn Wolfhard, Christoph Waltz, Burn Gorman and Tilda Swinton.

McGregor plays Sebastian Cricket, while Waltz is the villainous Count Volpe. Additionally, Swinton plays the Wood Sprite, which brings Pinocchio to life, and Perlman is the Podesta. Wolfhard is Candlewick, Blanchett is Spazzatura, and Gorman is the priest. Additionally, Tim Blake Nelson and John Turturro will appear in the film, although their characters are unknown.

In fact, Del Toro talked about the creation of Guillermo Del Toro’s Pinocchio Movie in 2008. In his own words:

“No art form has influenced my life and work more than animation and no character in history has had such a deep personal connection to me as Pinocchio. As far back as I can remember, I wanted to make this film.

Unfortunately, between 2012 and 2018, the film was stuck in development hell with no news of a release date. Eventually, Netflix acquired the rights to the film and started shooting it in 2020. At the same time, Alexandre Desplat announced that he had started creating the music for the film. To help promote the film, Simon and Schuster created a novelization of the screenplay. 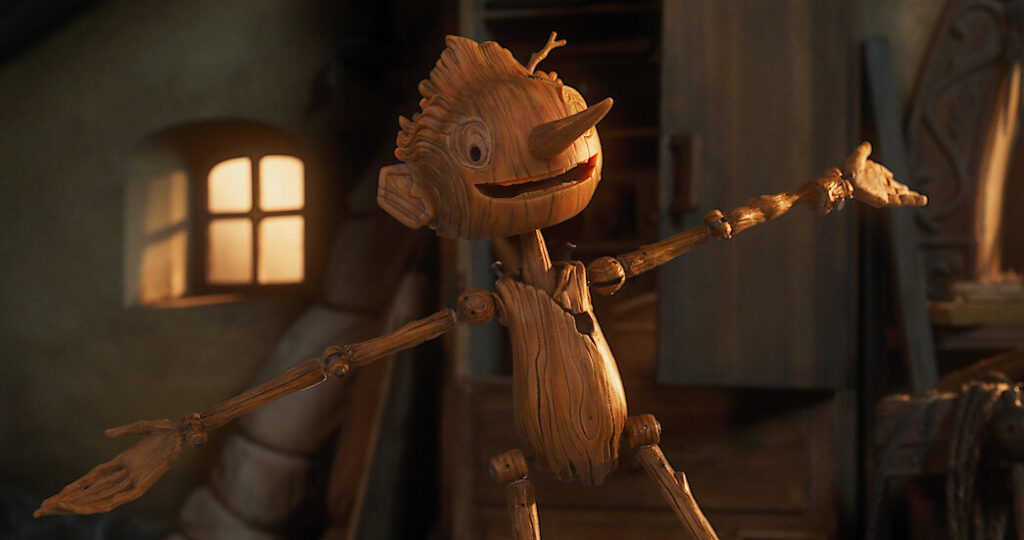 Currently, critics have given Guillermo Del Toro’s Pinocchio Movie rave reviews, with an average rating of 8.8 out of 10 on Rotten Tomatoes and “universal acclaim” on Metacritic. This reception is much better than the Disney version, which was mixed with negative reviews!

Del Toro, Lisa Henson, Alexander Bulkley, Corey Campodonico and Gary Ungar are working on producing the Netflix movie. Additionally, the film is a joint venture between Netflix, The Jim Henson Company, and Pathé, among other studios. The film had its world premiere in October at the BFI London Film Festival. This is Del Toro’s first entry as an animated film director.

You can catch the film in select theaters later this month. It will be available for streaming exclusively on the Netflix platform from December 9.e.

Hi! My name is Arvyn and I am an English teacher in the UK. I have been teaching English online for over 4 years to students from all over the world and of all ages. Outside of work, I’m a big fan of reading, playing video games and playing with my adorable kitties. See you!