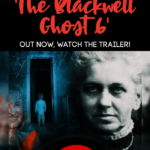 I have a love-hate relationship with found footage style films, they are either absolutely amazing or totally horrible.

Guess I’m totally behind because it’s episode 6 of the found movie series “The Blackwell Ghost”, so I better catch up fast!

The first installment of the found footage horror movie was released in 2017, luckily they are all available on Amazon Prime.

I just watched the part 6 trailer titled “The Blackwell Ghost 6” and it sounds like something I would totally love.

A filmmaker attempts to capture paranormal events on camera while trying to protect his children from the ghost that haunts their home. This is the 6th installment of “The Blackwell Ghost” series.

Synopsis of the movie

I’m going to have to do some serious binge-watching to get ready to watch the latest release that’s out right now on Amazon Prime!

Have you watched any of the others? Like, am I seriously the only person who has never watched one?

I’m going to change that this week with a few mega pints and a movie marathon!

Watch the trailer and let me know what you think!

You can find all “The Blackwell Ghost” horror movies found on Amazon Prime here.